Our farmhouse in the Valley of Virginia came with an irritable ghost.  The house has been in my husband’s family since 1854, and there was  a lot we knew about previous inhabitants.  One was my husband’s great-grandfather, Tom, who had been a captive during the Civil War at Ft. Delaware, a Union prison.  His life had been more traumatic than those of other ancestors, making me suspect that he was the one likely to be lingering in his childhood home.  The creepiest thing about it was the angry behavior that happened when we made changes to the house.  We never removed the furniture, china, books, and old clothing that family had left over the years, but when we painted, repaired the roof, and renovated the kitchen, all hell broke loose.  Someone or something was watching and was letting us know they hated change. I thought that by exploring Tom Smiley’s past, I might rid the house of the stomping, door slamming, object moving, uninvited visitor.  In the process, I’ve expanded my own understanding of this country’s troubled history.  With the book’s completion, angry activity has stopped.  I can’t say whether the ghost is gone for good or that his needs have now been met.

Another reason I began writing the book was because I wanted to know what it was like to live in the middle of a civil war–something no one has experienced on American soil since the mid-1800’s.  Thirty percent of our Civil War’s carnage occurred in the Shenandoah Valley, a 140-mile strip of land running southwest between the Allegheny Mountains and the Blue Ridge, from Winchester to Rockbridge County, home of Lexington.  In our house, a peaceful escape from big city life, people once lived day to day not knowing when the enemy was coming or a battle might erupt nearby.  Those people could hear thousands of cannons booming more than a hundred miles away during the Battle of Petersburg.  They wrote about having to keep their windows closed during broiling summer heat to avoid the maddening sound of guns firing “as often as the beat of my heart,” bringing with it fear that death was imminent for someone they loved. Armies of 250,000 mostly young men shot at one another, and bodies lay unburied on village roads. The story is as historically accurate as possible because we need to be reminded to carefully guard the fragility of what we have today.

Tom is a grunt, a foot-soldier, whose company rarely knows where it’s headed next.  Many books and movies feature Southern aristocrats who are officers, all of whom come from slave-holding families and are worried about losing their “investments.”  But Tom is more typical of most of the men who fought and died in the war, men whose families owned no slaves and had no power.  I wanted to explore the damage done to a man’s psyche when he realizes the horror of what he defended and the terrible cost in lives. 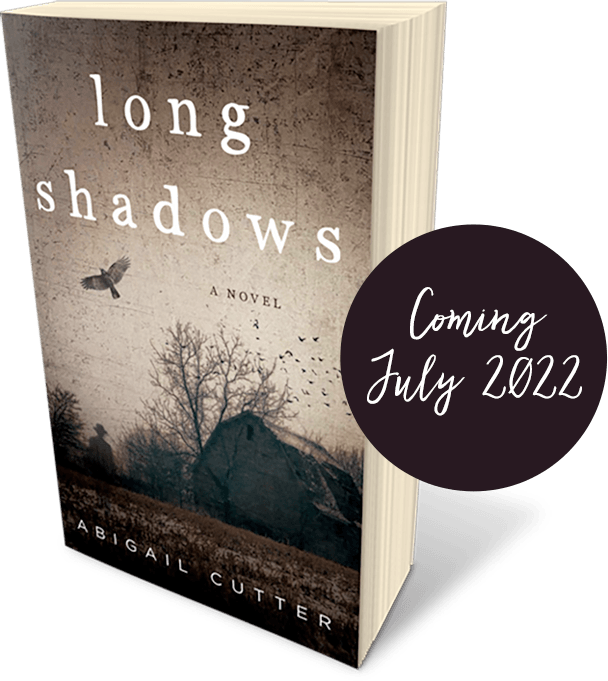 I have run out of space to store the several six-foot-high stacks of books on the American Civil War that I read while writing Long Shadows. But for the backbone of the book, I drew heavily on three non-fiction books and an amazing website.

My greatest debt is to Edward Ayers, who, while Professor of History at the University of Virginia, created “The Valley of the Shadow” – a database of letters, diaries, maps, and newspaper clippings from the troubled days before the war until surrender. He uses two small communities, one in Virginia, the other in Pennsylvania to illustrate the larger issues that tore the country apart. The  website can be found at valley.lib.virgina.edu.

The third book was This Republic of Suffering: Death and the American Civil War by Drew Gilpin Faust. Throughout, the viewpoints of people from every walk of life are brought together to deepen the reader’s understanding of the impact on the nation of so much death.

“Cutter paints a vivid portrait of the 19th century – a time of slavery and civil unrest….striking prose….A somber but absorbing Civil War tale about overcoming guilt.”

“What really haunts us–our own mistakes, or the weight of history? Based closely on the true story of her own uncanny encounters in an inherited antebellum Virginia farmhouse and old letters she found there, Abigail Cutter has crafted a novel that plumbs the painful history of a common soldier in the Civil War, and the burdens he cannot set down. A riveting read, rich in historic detail and moral complexity.”

Abigail Cutter’s Long Shadows digs down to the dark and bloody roots of the Civil War that cling to us today. Graceful, unflinching, and wise, the book unearths one family’s tragedy and the ghosts that haunt it through four generations. This is a very well-told tale, set in the Shenandoah Valley, which Cutter knows in her bones.”

“Abigail Cutter has rendered the Civil War and its consequences with a rare power and eloquence, combining literary imagination with fidelity to history. She has allowed people who lived and breathed in the past to live and breathe again, telling us of loss and suffering we need to remember.”

Author and winner of the Bancroft Prize for In the Presence of Mine Enemies: Civil War in the Heart of America

“A searing, brilliant, moving, and utterly original Civil War novel, told by the guilt-ravaged Virginia infantryman Tom Smiley whose own war never ended―at least not until a young couple move into his now-historic childhood home and start renovating, literally taking the past apart brick by brick, pots and pans, faded velvet curtains, cedar chests and china dishes and rusted hairpins, and even the tattered blue handkerchief box that contains his medals from the Battle of Gettysburg 25th and 50th reunions… bringing it all back. A stirring meditation on guilt and redemption.”

“Long Shadows is a richly imagined tragedy of a Rebel soldier whose regret for ill-chosen allegiance haunts him from the moment of enlistment through the horrors of a Union prison. It follows him into the afterlife, where he lingers in his ancestral home, unable to shed his shame for fighting for the cause of slavery. Masterful historical research and detail of the 19th century invest this story with a reader’s pleasure in a felt life. All of this with an ear for the poetry that lives in disaster.”

“Novels that straddle both the historical and contemporary genres often have to sacrifice one of the two in order to be fully realized, but the case is not so with the excellent balance that Abigail Cutter strikes… The plot is laid out and cleverly paced… a richly atmospheric and deeply engrossing novel.”